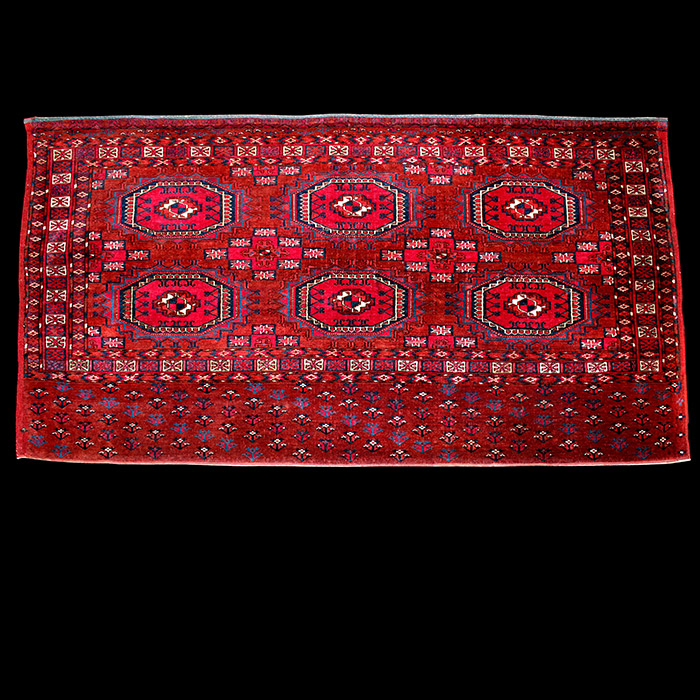 13 x 35 = 455 asymmetrical kpsi, pulled open to the right, with a width/height ratio of nearly 1:3, resulting in a medium flat Salyr gül and a medium firm handle.  Slightly depressed left warps shows from the back create a ribbed effect when seen next to the protruding right warp.  A front face from a single tent bag with it’s original flat woven backing removed.  Usually woven in pairs to distribute weight evenly on the camel.  Woven singly or with two on one loom resulting in an opposing pile direction for each pouch.  Hand spun, drop spindled, combed wool, processed for this particular knotting, in it’s foundation (wefts and warps) and in the knot shoots.  Wool is bred and  processed to give a straight spiky shiny sparkling wool shaft for this type of knot.  Bleached hand processed white cotton highlights throughout the rug are rarely found in 19th century Ahal Téké Türkmen çüwals but rather in late 19th century Sarïq Türkmen çüwals.  Both the wool and cotton knots are closely and evenly cut.  Top and bottom ends have a one inch flat woven web immediately following the nap with a dark blue & then red wefted horizontal band followed by a natural beige wool kelim edge, cut, turned under and sewn on the top.  A dark blue band preceding natural blonde wool, is cut, turned under and sewn down on the bottom end.  Invisible weft from the back uses two long strand combed then twisted (plied) wool shoots.  Pile runs from bottom to top indicating that this pouch was woven on their loom as one of a pair.  Straight combed blonde twisted long strands comprise the spiky wool warps.  Fine weave, cut low.  Velvety feel to the pile.

Transport cartage bag, a very fine quality textile, maturely and skillfully woven.  Most likely the property of a very high ranking and wealthy Merv Téké Türkmen chief being the only one who could have mandated the weaving of such a fine and carefully wrought specimen.   Also, the identifying tribal insignias of the Merv Tékés as depicted by their ornaments are unique to that tribe.

Six turreted Salyr (aka Shield, Mary) main or primary güls in two rows of three, outlined in a medium blue.  Téké Türkmen çüwalswith Salyr main gül ornaments were common in the Merv Oasis during the second half of the 19th century.   The Salyr design influence is heavy in Merv weaving is obvious as well as the construction of the knots.  These güls here are outlined in light blue and lined on the inside with outward pointing pentagonal gelin barmak motifs and an inner yashil gochak variation.  Eight eight-point stars inside squares surround inner crosses to form two minor sacred sagdak (mis-trans., Sogdian) star emblems and ten partially hidden sagdak star emblems with aÿna güls inside.  Two small guard borders with 'diamond and cross' syncretic forms flank a main repeated khaikelbagi (so-called British flag) border.  That pattern is also found in a woman’s amulet bag design.

The centers of each main gül in two complete minor and ten partially hidden minor charky palek emblems are highlighted with white cotton, along with additional white cotton highlights in the borders.  Bottom apron composed of offset diagonal rows of small stem three petal flowers (kelle motif) in alternating colors (Merv feature, Mushkova), each petal is piled with bleached white cotton highlights(usually seen in Sarïq Türkmen çüwals only and is rather uncommon in Ahal Téké Türkmen çüwals) and every fourth row is dyed with a disappearing effect of light blue.  Merv Téké Türkmen çüwals  from the latter 19th century have a darker bluish red color tone to them similar to Salyr rugs. Also, the heavy ribbing when viewed from the back is a Salyr/Merv feature unlike the Ahal Téké Türkmen çüwal where the knot nodes when viewed from the back are symmetrical or horizontal, not depressed or ribbed.

Original flat woven blonde wool backing has been removed.  Damage to both side edges was re-piled about ½ inch into both sides in 2008 by a Türkmen women weaver in the northeast Iranian countryside.  The rest of this bag face is in perfect condition.

Central Asia’s southeastern Turkmenian Oases province of Merv, located in the eastern part of the Ahal Oases in Turkmenia.  Originally Western Turkestan, then Persian Turkestan, then Russian Turkestan for two centuries and now independent Turkmenistan.  The Russian Army completed their final conquest of Turkmenia only after finally defeating the Ahal Téké Türkmen at the Battle of Gök Tépé in 1881 and afterwards peacefully occupying the Merv Oasis by 1884.

Visit Glossary  page for any further definitions not highighted in red in a pop-up window.